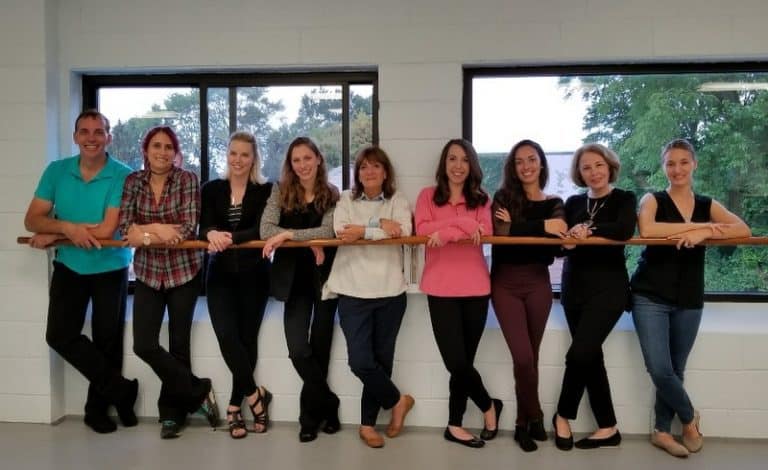 Join Us Today
has a multi-faceted background of training in dance. Locally, she has studied with Lucien Maley, Richard Sias and Veronica Manz. She has also attended numerous master classes in New York City at Dance Masters of America workshops, teachers conventions, and attended a teachers seminar with Jurgen Schneider, Irina Kolpakova and Janina Cunova on the Russian Ballet technique at the University of the Arts in Philadelphia. Mrs. Mucci has choreographed many community theatre musicals including the Pompeian Players and other local productions. Mrs. Mucci has also contributed her talents to the Syracuse Symphony Family Series, “Festa Italiana” and the New York State Fair International Building Performances. For 21 years, Mrs. Mucci has coordinated and rehearsed all the children’s roles in the Moscow Ballet’s production of the holiday favorite “The Nutcracker” as well as being a past participant in the Syracuse City School District’s Partners for Education and Business Program.
Larry Crabtree is originally from Syracuse, N.Y., where he received his training at the Center of Ballet under the direction of Deborah Boughton. Larry was a Principal Dancer/Assistant Director/Ballet Master for the Anglo-American Ballet based in New York City for over 20 years, under the artistic direction of Catherine Kingsley (ARAD). He was a member of the “Peter Pucci Plus Dancers”, “Shore Ballet” (NJ), “New Jersey Ballet”, ”New York Theatre Ballet” and Center Stage for Dance & Theater” (NJ), among others. Mr. Crabtree has toured nationally and internationally appearing at such venues as Lincoln Center, Joyce & Joyce Soho, The New Victory Theater in NYC, Edinburgh Festival (Scotland) and throughout the United States, Switzerland and Mexico, as well as dance appearances on television programs including the “Today” and “Maury Povich” shows. As a teacher, Larry has been teaching for DCN for 14 years, he has also been an Adjunct Faculty member at Le Moyne College and Syracuse University, a faculty member for Circle in the Square Theater School (NYC), the STEPS Studios (NYC), Center Stage for Dance & Theater and New Jersey Ballet (NJ), the Bill Reed Summer Musical Theatre Intensive held in Vermont, and Summer Dance Intensives at Dance Works Studio, Utica, NY.
Studied Ballet, Jazz, Modern and Tap at Dance Centre North for 14 years. After auditioning, she attended Summer Intensive Programs at Boston Ballet, Joffrey Ballet and Central Pennsylvania Youth Ballet in Carlisle, PA. Jennifer was also accepted at Burklyn Ballet Theatre in Vermont and the NYSSA Contemporary Dance Company and the Angel- Fraser-Logan Contemporary Dance Company. While attending a jazz workshop with world-renown jazz instructor and company director Gus Giordano, Jennifer was awarded a scholarship to the Gus Giordano Dance Studio in Evanston, Illinois. As one of the three founding members of CNY Ballet Company Dancers, Jennifer’s eclectic training has enabled her to dance a wide range of roles including contemporary ballet, modern and jazz. For CNY Ballet she has most notably danced the Girl in “The Ugly Duckling”, Aquarium & Fossil in the “Carnival of the Animals”, “Way Over Yonder”, “Playing Bach”, “Catch Me When I Fall”, “Chantez Les Bas”, and “Swing Suite”. Jennifer has also performed with the “Underground Dance Project,” a jazz dance company in New York City, as well as being a “Las Vegas Finalist” in the 2006 season of the Fox Network’s hit TV program “So You Think You Can Dance.” In addition to teaching, she is represented by Go To Talent Agency in Los Angeles as well as choreographing and dancing with an international singing group.

Hailing from Utica, NY, Julia’s passion for performing began at a young age. Attending Utica College, Julia graduated summa cum laude with a B.S. in Psychology and minors in Sociology and Gender Studies. A dancer of twenty years, her ballet training is rooted in the Royal Academy of Dance syllabus, having examined through the Intermediate level. Julia studied at Ballet Arts of CNY and Mohawk Valley Ballet under the direction of Delia Foley, A.R.A.D. and Melissa Larish, RAD RTS. She later continued her studies at Hamilton College in Clinton, NY from 2015 to 2019, partnering with the Dance and Movement Studies program. Since 2015, Julia has appeared as a guest artist with the Mohawk Valley Ballet and Central New York Academy of Dance, performing principal roles such as Sugar Plum Fairy, Snow Queen, and Dew Drop Fairy in The Nutcracker in addition to dancing as a soloist in works by David Fernandez, Sandra Stanton, Paris Wilcox, and Catherine Wright. Julia currently teaches ballet and group fitness classes at a number of studios in the greater Syracuse-Utica area. She has served as a faculty member at Ballet Arts of CNY, Syracuse School of Dance, Tiffany’s School of Dance, Mary Lourdes Academy of Dance, Star Performance Dance Centre, and Dance10 Studio. Her choreography has been featured in showcases with Syracuse Contemporary Dance Company, Mohawk Valley Ballet, Dance with Utica, and Salt City Dance Festival as well as Tiffany’s School of Dance’s full-length production of “The Nutcracker,” for which she acts as the artistic director. Julia holds certifications in Progressing Ballet Technique, PiYo, LaBlast Fitness, Barre Intensity, and P90X. She is an ACE certified group fitness instructor and photographer. Julia anticipates post-graduate studies in social work, with a focus in adolescent eating disorders.